Sometimes, do you find yourself helpless in a flow of human-centric perception?
Mind might go something like:
You are human, and I – mind – fancy being anthropocentric at times.
..and you feel taken?
..and you feel promising:
ok, lets do this ethnocentric human shebang – but, don’t worry, i’ll reflect upon that once the wave has faded!

..and you let yourself swell in human-human-anthropocentricity-human tide?

Ever since i arrived to Sarajevo, people around seemed unusually attractively beautiful.

When i was in Brazil, i felt everywhere – pavements, lights, humans, colours, times, angles, places and so on – are unusually attractively beautiful.
Here, just humans.

It bugs me since it feels like many people don’t Try. Simple. Raw at times. Dark in some unexplained visual humour.

It bugs me.
The feeling seems to be only vision deep.
Only the looks. Sometimes when conversations come, i kind of regret initiating – despite undisputed warm and genuine friendliness all around.

It bugs me. Perhaps this indicates a side/part of me i either put down or am clueless about.

Wanted to put a an image of people in sarajevo.
Could have simply gone out and clicked a full street image.
However, how do we know i will not try to make the image look good for my visually hungry mind?

Opted for an online image.

Seen since it came as an image that can be used followed a term:
people in sarajevo

However, the choice came because they seem beautiful to – in a non visual way. 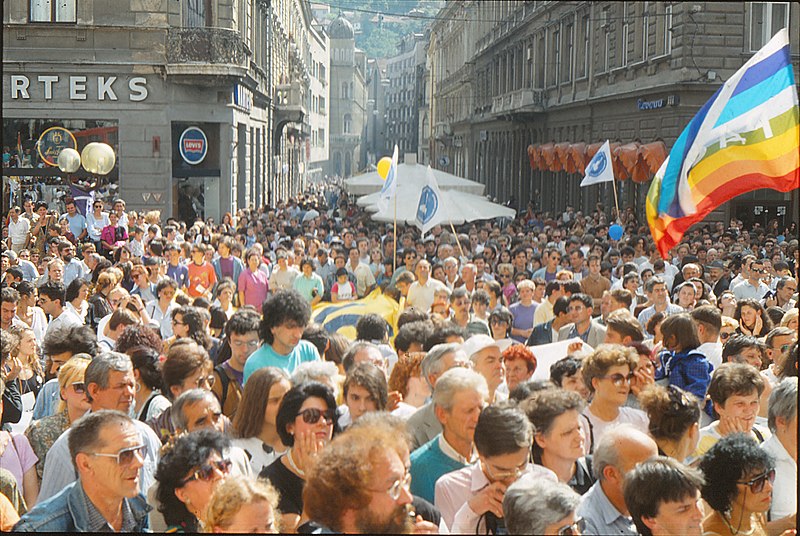 This image is from a march in 1991. A peace march that went through all the former yugoslavia.

Look at these people.

A few years from this photo – they are in a war. (all wars are horribly terrible and thast one wasn’t any exception.)

Seemingly, one might be forgiven for initially thinking these people have lost and the violent one prevailed.
However, let’s consider:
Can it not be that these peace pursuing people were desperately required to end the war?

Can it not be that
when war, violence and brutalisation come, precisely such people, ones that pursue ways to live with many Others and alter others in peace rather than harmony – are in fact the ones that prevail? The ones that might even help lessen the inter-generational and ongoing brutalisation processes?

Is that too soapy and anthropocentric?